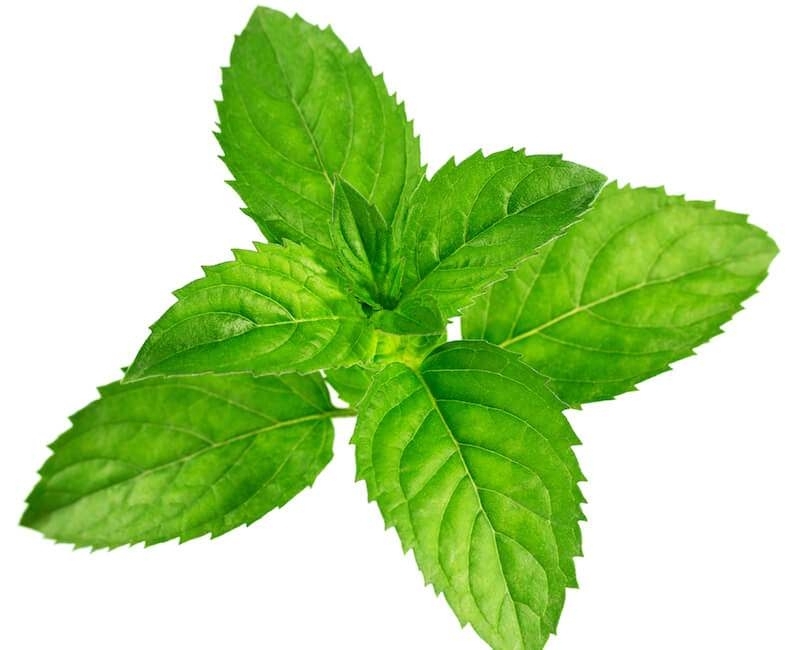 Spearmint, or spear mint, is the common name for a species of mint, Mentha spicata. It is native to the Mediterranean region but it can also be naturally found in Europe and Asia. . Spearmint is pleasantly aromatic herb, packed with numerous health benefiting vitamins, antioxidants, and phytonutrients. Spearmint's aromatic and carminative oil is referred to as spearmint oil which is widely used for culinary and medicinal purposes. The oil is extracted from the leaves of the spearmint herb by the conventional process of steam distillation. For humans, spearmint oil is used to flavor diverse products (toothpaste, candy, shaving cream) and in aromatherapy and alternative medicine.

Carvone, a primary component of the oil, is responsible for the spearmint smell. For the spearmint plant, carvone provides protection against plant pathogens, such as fungi. Carvone has been used for air freshening products. Other important chemical components of spearmint are alpha-pinene, ß-pinene, carvone, cineole, linalool, limonene, myrcene and caryophyllene. These compounds that are found to be highly beneficial to one’s physical and mental health. Its leaves and herb parts carry essential oil, menthol.

Unlike in peppermint, spearmint leaves compose only small amounts of menthol, 0.5% compared to that 40% in peppermint. Less menthol content would make this herb least pungent and subtly fragrant herb in the mint family. The herb is also rich in many antioxidant vitamins, including vitamin-A, β-carotene, vitamin-C, vitamin B-6 (pyridoxine), riboflavin and thiamin.

REGULATES MENSTURATION
Problems with menstruation, such as irregular periods, obstructed menses and early menopause can be solved with the help of spearmint oil. It also reduces cramps, lower back pain, bloating, nausea, fatigue and irritability that commonly accompany menstruation. It actually encourages natural hormone balance and enhances estrogen production. It can even slow down the aging process and also delays the onset of menopause.

CARMINATIVE PROPERTIES
A carminative is a substance that when taken helps in the alleviation of gas and bloating. Spearmint essential oil is a natural carminative. It helps tiny gas bubbles to adhere to each other, forming one larger bubble that can easily be expelled as flatulence. Spearmint oil is said to relieve the surface tension of the bubbles, which is a type of force that keeps them apart, which is why spearmint is amongst the most popular natural remedies for gas and bloating.
It also helps relieve stomach aches, indigestion, cramps and other uncommon issues such as loss of appetite, restless feelings, insomnia, chest pain, headaches, and vomiting.

SPEEDS WOUND HEALING
Spearmint oil works well as an antiseptic agent,  which can be useful in preventing infections of open wounds. It prevents wounds from becoming septic and its regular application to an open wound not only speeds up healing but can reduce the appearance of a subsequent scar.These antiseptic properties are due to the presence of components like menthol, myrcene, and caryophyllene.

PROMOTES RESPIRATORY HEALTH
Spearmint oil is also known greatly for treating common respiratory problems which include colds, nasal congestion, asthma and even flu due to its naturally soothing and anti-inflammatory qualities. It is an excellent expectorant, helping to break up accumulated mucus in the lungs, and allowing for its easy expulsion from the nostrils or mouth. In addition, its strong scent can be used to cure nasal congestion, and can helps clear up sinuses in no time.

OTHER BENEFITS
Helps to loosen up tensed muscles and sore joints, helps to soothe inflammation, natural and powerful restorative, helps stimulate the circulation of blood in your body and aids in the free flow of oxygen.